In our previous post, we explained some common definitions that are used in the manufacturing of prototype printed circuit boards. Here we continue our list:

Glass transition temperature: this is the temperature at which an amorphous polymer changes from a hard and brittle condition to a rubbery consistency. When this transition happens, many changes occur to the physical properties of the prototype PCBs, including hardness, brittleness, coefficiency of thermal expansion, and/or specific heat.

Ground plane: A conductor layer, which is used mainly as a reference point for circuit returns, shielding, or heat sinking.

Hole density: the amount of holes per unit area.

Impedance: the total passive opposition offered to the flow of electrical current. Generally, this term is used to describe high frequency circuit boards.

Jumper wire: an electrical connection formed by a wire between two points on a printed circuit board prototype after the initial conductive pattern is created.

Laminate: the product that is made when two or more layers are bonded together.

Laminate thickness: thickness of the base material before processing, not including metal-clad.

Land: a portion of the conductive pattern used for connection and the attachment of components to the board.

Mask: the material applied to the board that helps adhere the solder.

Measling: a condition where there are small white spots or crosses show up between the surface of the laminate. If this is noticeable, there is a separation of fibers in the glass cloth at the weave intersection.

Outer layer: the top and bottom sides of any prototype PCB.

Pad: the portion of the conductive pattern that is meant for the mounting of components on prototype PCBs.

Pattern: the configuration of the conductive and non-conductive materials on the printed PCBs. This term can also be used on related tools, drawings, and masters.

Schematic Diagram: the drawing that shows all the connections, circuits, components, and functions of the PCB’s electronic circuit. 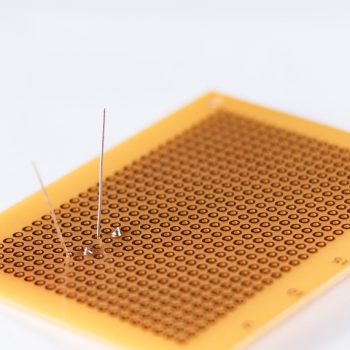 Circuit board prototyping is a great way to launch into the field of electronic engineering.…