PCB Manufacturing and PCB Design has been changing a lot in the last years, the first circuit board designs were quite simple, but new technologies, have brought new performance needs to the Printed Circuit world, and the design and fabrication practices have become more sophisticated. One of these practices is Controlled Impedance in PCB Fabrication, which is intended to vary from the amount of power to the speed of a signal in the Circuit traces.

WHAT DOES IMPEDANCE MEAN

WHAT IS CONTROLLED IMPEDANCE

A common example of this feature is the design of a coaxial cable: formed by an inner conductor separated, using an insulator, from the shield (an outer cylindrical conductor). The electrical characteristics of the insulator, along with all components' proportions are carefully controlled to regulate the impedance level of the cable.

Correspondingly, in PCB Manufacturing, the traces represent the conductor, the laminate represents the insulator and the planes represent the shield. Therefore, the impedance of a printed circuit board depends on the dimensions and materials used in the fabrication process.

WHY IS CONTROLLED IMPEDANCE SO IMPORTANT?

The purpose of a trace, in a Printed Circuit Board, is to transfer the maximum signal power from source to load, but this assignment can only be achieved when the impedance value of the source matches the impedance value of the load, otherwise a portion of the signal's energy will be reflected to the source, degrading its quality. With today's fast rise time signals, the design of Circuit Boards with controlled impedance has become very popular.

HOW IT IS DONE?

The impedance control in Printed Circuit Board Fabrication and Design is accomplished by two means: a well-defined PCB Stack-up and careful trace design. It is known that Impedance is proportional to laminate height and inversely proportional to trace width and thickness. Consequently, varying the sizes and spacing of a specific trace will adjust its impedance value.

Impedance depends also on the dielectric constant of the laminate: A number used to quantify the inherent ability of a material to store electrical energy in an electric field. The most common configurations for controlled impedance traces are Stripline and Microstrip, and their different geometries can be seen in the following figure. 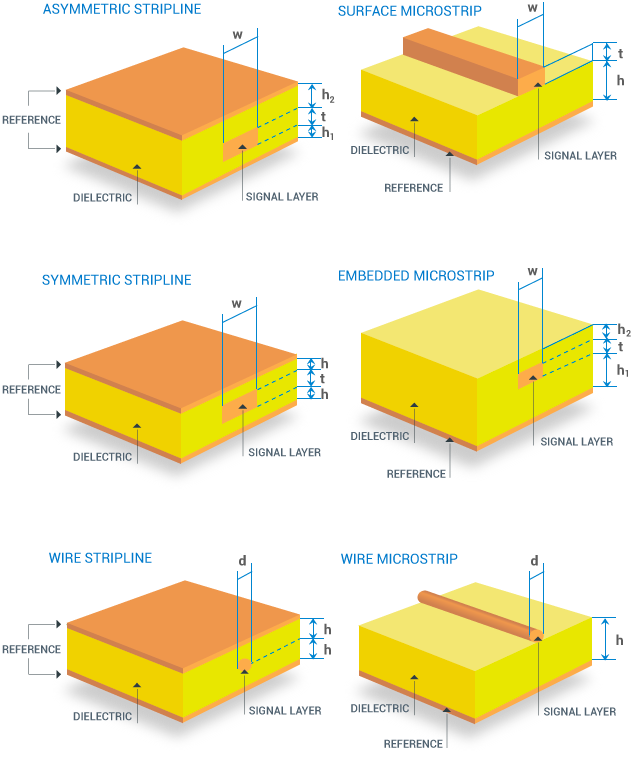 Microstrip involves a signal trace separated from a reference plane (ground plane) by a dielectric layer. There are different microstrip configurations, in the simplest case the signal trace is placed on the surface of an outer dielectric layer surrounded by a solder mask or the air. For thin traces, the soldermask will affect the impedance of a microstrip, reducing its value by 2 to 3 ohms. Stripline consists of a signal trace surrounded by a solid dielectric that separates the trace from two reference planes.